Love them or hate them, Nike tennis shoes are rarely boring. Whether adopting Flyknit and other technologies from its sneaker vault, the company is always experimenting and innovating with the looks and traits of its tennis models with varying degrees of success. The new Air Zoom GP Turbo borrows from the brand’s basketball and running categories to create an extremely cushioned, stable and ultimately effective high-performance shoe. With a few tweaks, it might even be exceptional.

When sliding the foot into the shoe, lacing them up and taking a few steps the high degree of padding and bounce are readily apparent. As is the somewhat narrow profile. I find the fit of Nike shoes to be somewhat across the board. I struggled to play in the recently released Vapor Cage 4 due to the voluminous toe box. My forefoot was swimming around during points and it felt like I needed to drop down at least one size. The fit of the GP flipped that script. While much snugger and to my liking, it was probably a little too cramped around the toe box.

It didn’t feel like the length was too short—so I’m not sure going up in size would help—but rather that it tapered too drastically around the forefoot. However, the longer I played in the shoe, the more the toe box stretched and became less of an issue. And the snugness along with the worthy lacing system did give it a connected feel to my foot. 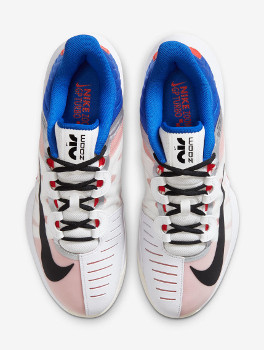 While I eventually got accustomed to that glove-like fit, breathability was a more constant issue. The semi-translucent TPU upper has been adopted from Nike Running to emphasize flexibility, lightweight and natural movement. It was comfortable and supportive, but combined with the tighter fit—my thick socks probably didn’t help—it caused noticeable hot foot.

Additional ventilation wouldn’t hurt. It may not be a problem under moderate conditions, but in warm and humid summer weather my feet were toasty and sweaty. And with the weight of the shoe—more on that in a bit—at the end of a long, perspiring match that can feel a little sluggish.

But some of that was forgiven for the cushioning of the shoe, which was exceptional. Easily its most impressive feature. The Zoom Zero that preceded the GP had Air cushioning in three-quarters of the length; this time around Nike borrowed from their basketball technology and introduced full-length cushioning. Undoubtedly a necessity to the protect the feet of 7-footers on the hardwood. The Zoom Air unit was also raised up out of the midsole and positioned closer to the foot. The result was a pillow-like feel with superior shock absorption and comfort. It also created a bounciness and added push when moving toward the ball.

And it didn’t stop underfoot—the collar was soft and plush with a high heel counter to help lock in the rear of the foot. Typical of a shoe that employs such significant padding, the GP was on the heavy side. My 11.5 weighed in at a hearty 17.1 oz., more than I generally carry around. Players who opt for lightweight, speed shoes may find this one a bit full-bodied. Those who don’t mind a little meat on their models will probably just regard it as sturdy.

The outsole has a nice combination of wider tread in the higher wear areas of the medial side of the shoe, and a tighter pattern on the lateral side for better grip on slides. This makes it a good candidate for all-court play, although it seems best-suited for hard surfaces. The area around the toe cap has been reinforced to extend durability, and a lateral flange jets out to help with stability and push off on side-to-side movement.

Overall, the Air Zoom GP was one of the most well-cushioned and protective shoes I’ve tested in recent memory. Some of that comfort was offset by the snug width in the toe box and the subsequent mediocre breathability. Remedying those nitpicks in the future could make this an unbeatable shoe. In the meantime, aggressive movers who make hard cuts on hard courts will forgive those shortcomings for the superior shock absorption and dependable performance.